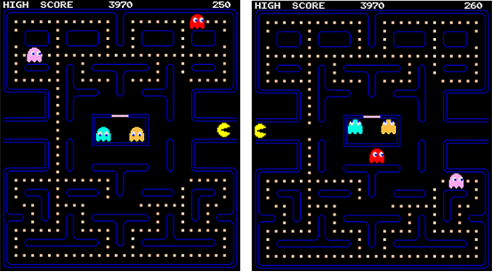 Below we describe addition and multiplication of two signals as well as scaling and time shifting a signal in detail.

Scaling implies multiplying the signal amplitude by a constant number $\alpha$ resulting in $\alpha~s[n]$, where $\alpha$ can be positive, negative, greater than or lower than $1$. For example, Figure below shows a signal $s[n]$ scaled by 4 (compare the amplitudes of both signals on y-axis). One word of caution: The whole signal gets scaled by the same value here and hence scaling is different than sample-by-sample multiplication of two signals.

A signal $s[n]$ can be shifted to the right or left by any amount $m$. There are two ways to look at time shifting a signal.

Most textbooks on discrete-time signals describe this process as follows. There are two problems with the approach above.

This method is based on the earliest notions of time kept by humans: past, present and future. Replacing the word present with the NOW, consider the following quote:


"Realize deeply that the present moment is all you have. Make the NOW the primary focus of your life."

In signal processing applications, NOW is the time index $0$ and we want to make it the primary focus of a signal’s life, as shown in Figure below. Stated in another way, just look at the time-axis itself. Keep the discrete-time signal as it is, but move 0 time index $m$ units to the left for $n-m$ and $m$ units to the right for $n+m$, as in Figure above. Notice that index 0 of $s[n+2]$ is at the same sample as index $2$ of $s[n]$, which indicates accessing a future value. Although the difference is only how to look at the process, this is a simpler and more intuitive approach. This will be very helpful when we will discuss the topic of convolution later.

Note that as far as drawing time shifted signals is concerned, we will mostly use the first approach because it saves page space by aligning the time-axis indices right on top of one another. Note that the rules of shifting to the left or right also become reverse due to the flipped time-axis, $-n$, itself. For example, from the perspective of intuitive method above, an axis of $-n$ instead of $n$ suggests that the past becomes the future, and vice versa. Hence, $s[-n+3]$ first flips the signal around time origin, then travels $3$ units to the past to label it the new NOW (time index $0$).

Circular shift is very similar to time shifting of a signal, except that the available axis for time shifting a signal is from $-\infty$ to $+\infty$ while we only focus on a segment of $N$ samples for a circular shift. A simple rule to remember circular shift is "what goes around comes around".

As circular shift is done with respect to a length-$N$ segment, shifts are computed modulo $N$ and denoted as $s[(n-m) \:\text{mod}\: N]$, where $(n-m)\: \text{mod} \:N$ means shifting the signal as we normally would, but bringing them back in the range $0\le n \le N-1$ from the opposite side. For example, the next Figure shows two examples of circular shifts: The significance of circular shift will become clear when we discuss the Discrete Fourier Transform (DFT) later.