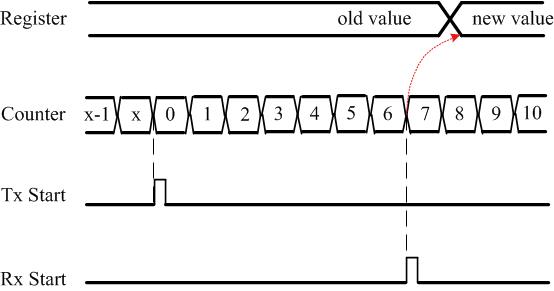 With the growth in the Internet of Things (IoT) products, the number of applications requiring an estimate of range between two wireless nodes in indoor channels is growing very quickly as well. Therefore, localization is becoming a red hot market today and will remain so in the coming years. See the big picture of localization for general solutions to this problem.

One question that is perplexing is that many companies now a days are offering cm level accurate solutions using RF signals. The conventional wireless nodes usually implement synchronization techniques which can provide around $\mu s$ level accuracy and if they try to find the range through timestamps, the estimate would be off by

where $3\times 10^8 m/s$ is the approximate speed of an electromagnetic wave. So how are cm level accurate solutions being claimed and actually delivered?

This is a classic example of the simplest of signals solving the most complex of problems.

In this article, my target is to explain the fundamentals behind this high resolution ranging in the easiest of manners possible. Needless to say, while each product would have its own unique signal processing algorithms, the fundamentals still remain the same.

For the sake of providing the big picture, remember that there are other methods available, the best of which are based on optical interferometry. Then, there are ultrasound, optical and hybrid options available as well. RF is the cheapest solution though and there is nothing better than getting accurate measurements using the RF waves.

The following techniques are most widely used in RF domain.

While I do not explain each of the above in detail (Google is your friend), I summarize their pros and cons below (anchors are wireless nodes with known positions).

As a final comment, all range estimation methods need a reference point. Anchors provide this reference when an accurate measurement of position is needed. If it is just the range from another node that is of interest, any node can use its own reference. This is the situation we assume in this article.

What is a Timestamp?

A typical embedded device comes with a counter and a register. The value of the counter increments/decrements as driven by an oscillator. When an increment counter reaches the maximum value (0xF…FF), or a decrement counter reaches the minimum value (0x0…00), it overflows and starts counting again. If a desirable event occurs, say a message arrival event driven by a Rx start interrupt, the value of the counter can be captured and stored in a register that can be later accessed to find the time of that event – according to the node’s own reference clock.

As an example, consider the following Figure where Figure 1: The counter, register and Tx and Rx start events

If you don’t know much about electronics, it is enough to know that event times can be recorded at a node and accessed for processing later.

The ranging setup in this discussion consists of two nodes that can exchange timestamps with each other through the wireless medium as shown in Figure below.

Figure 2: Two nodes exchanging timestamps with each other

The distance between the two nodes is $R$ while the time of flight from one node to another is $\tau$. Consequently,

Refer to the next Figure to observe how the chain of events unfolds.

Figure 3: The chain of events with their corresponding timestamps exchanged between Node A and Node B

Any node can start its counter at any given time. So to set a reference point at an arbitrary real time 0, the time offset of Node A is $\phi_A$ while that of of Node B is $\phi_B$.

Therefore, we can write

Now it is clear that the time base of Node A serves as the reference for estimating this delay. Research literature refers to this approach as a ‘two-way message exchange‘. To pay tribute to Tolkien, I call it ‘There and Back Again‘. Figure 4: Results for a ranging experiment with an 8 MHz clock

Assume that a 100x accuracy, say $37.5$ cm, is needed. Then, we need a clock generating timestamps at a rate of 800 MHz. That kind of expense and power, however, is more suited to computing applications and not to an embedded device.

In conclusion, we cannot afford a high rate clock but still desire a high resolution.

The Arrival of the Phase of Arrival

In the spirit of time of arrival, this method is known as the phase of arrival. First, observe that we already have access to something similar to a high resolution clock – a continuous wave (CW). Consider a simple sinusoid at GHz frequency and just plot its sign. It looks very much like a very high rate clock. Figure 5: Sign of a simple continuous wave is similar to a high rate clock

Now again consider two wireless nodes that are exchanging continuous waves instead of timestamps in the following manner.

where $2\pi F_1 \phi_A$ is just a constant and could easily be expressed as a single term $\phi’_A$. As opposed to timestamps case, it is not required, neither it is easy, to measure the phase $2\pi F_1 T_1$ explicitly.

Using $t_2 = t_1 + \tau$, Node B employs some signal processing algorithm to measure the phase difference between the two continuous waves as

It is important to write the equation in the above form because all
we know is the phase difference $\Delta \theta _{A->B}$. We do not know anything else.

3. After a processing delay, Node B sends a continuous wave in the reverse direction.

4. Node A measures the phase difference

That was so easy, so fast and so accurate. But the world is not that simple.

The solution to the accuracy problem creates a problem of its own. Remember we said that when an increment counter reaches the maximum value (0xF…FF), or a decrement counter reaches the minimum value (0x0…00), it overflows and starts counting again. So if a clock is very fast, it overflows more quickly and resets again. It might even do so when the signal on the reverse path might not have returned! The same is the case with the sinusoids.

Writing the fractional phase as a function of range

The rollover unwrapping problem is now reduced to cancelling $n$ from the above equation. This can be easily accomplished by sending another tone at frequency $F_2$ that would generate the result

The above two equations can now be solved to cancel $n$ and create an effect equivalent to sending a single tone with a very large wavelength or very low frequency $F_2-F_1$.

The range is now found to be

Having eliminated the phase rollover, we are interested in maximum range that can be unambiguously estimated through the above equation. Clearly, this depends on the frequency difference between the two continuous waves. Also, remember that $\Delta \theta_{\text{frac},F_2} – \Delta \theta_{\text{frac},F_1}$ can attain a maximum value of $2\pi$. Then, for example, for a 2 MHz difference, i.e., $F_2-F_1=2\times 10^6$, the unambiguous range is

To combat interference and multipath in indoor channels, a number of different continuous waves can be used and their results can be stitched together to form a precise range estimate. This is plotted in Figure below. After taking a number of measurements, a plot of phases versus frequencies is drawn. Similar to Eq (6), we can write

where the constant term arises instead of $n$ as it might not be the same for all frequencies. However, the slope of the curve is still given by

from which the range can be found as

This is why it is known as the Phase Slope method. 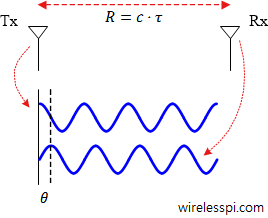 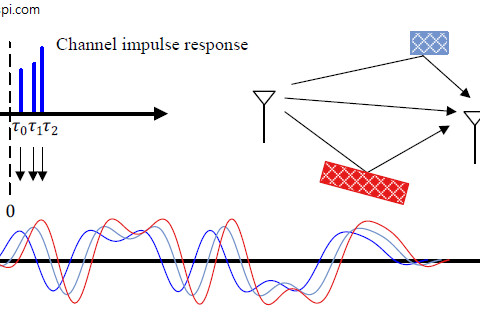 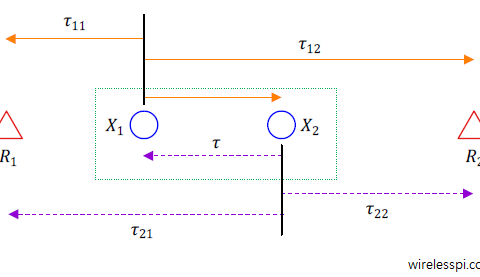