In the article on modulation – from numbers to signals, we said that the Pulse Amplitude Modulation (PAM) is an amplitude scaling of the pulse $p(nT_S)$ according to the symbol value. What happens when this process of scaling the pulse amplitude by symbols is repeated for every symbol during each interval $T_M$? Clearly, a series of bits $b$ (1010 in our initial example) can be transmitted by choosing a rectangular pulse and scaling it with appropriate symbols.

Our next step is forming a cumulative waveform from these individual symbol-scaled pulses. Remember from the article on transforming a signal that mathematical expression for a signal $p(nT_S)$ delayed by an amount $T_M$ or $L$ samples is given as $p(nT_S-LT_S)$ $=$ $p(nT_S-T_M)$, where $T_M$ is the symbol duration and $L$ is samples/symbol defined as $T_M/T_S$. Since the same pulse is scaled by the symbol value during each $T_M$, In a similar manner to $2$-PAM, a $4$-PAM waveform based on $4$ symbols can be constructed by scaling the pulse amplitude by different symbol values during each $T_M$, as illustrated in Figure below. The main purpose of this text is to find the answer to the following question: which operations are necessary to perform at the Tx and Rx sides such that we can detect that symbol with the highest probability? To explore the answer, we start with a simple PAM modulator and detector.

At this stage, we are ready to build a conceptual PAM modulator. The block diagram is drawn in Figure below in which Tx signal is generated in the following way.

The mathematical derivation for the PAM modulator was shown above. The received signal $r(t)$ is the same as the transmitted signal $s(t)$ but with the addition of additive white Gaussian noise (AWGN) $w(t)$. The symbols are detected through the following steps illustrated in Figure above.

Notice that a symbol is the basic building block of a digital communication system. Consequently, symbol time $T_M$ is the basic unit of measurement along the time axis of such a system. While the correlator output in demodulation depicts sampling the output just once at optimum instant $0$ out of $-(L-1) \le n \le 0$, it is true for all integer multiples of symbol time as well, i.e., the output is sampled just once for every symbol duration at optimum instants $T_M$, $2T_M$, $\cdots$.

Carefully examine the key samples at $T_M$, $2T_M$, $\cdots$. These are the samples we are looking for in the waveform for the detection purpose. Even when the waveform has suffered from all the distortions the real world has to offer, locating these samples and mapping them back to the constellation is a beautiful process, actual details of which we will encounter throughout this text.

Let us discuss the mathematical details of this process. The Tx signal is expressed as (the reason for using a different variable $i$ instead of $m$ will shortly become clear)
\begin{equation*}
s(nT_S) = \sum _{i} a[i] p(nT_S-iT_M)
\end{equation*}

[Resampling] The ADC in general does not produce an integer number of samples per symbol, i.e., $T_M/T_S$ is not an integer. As we will see later, a resampling system is required in the Rx chain that changes the sample rate from the ADC rate to a rate that is an integer multiple of the symbol rate.

[Symbol Timing Synchronization] The peak sample at the end of each symbol duration is not known in advance at the Rx and in fact does not necessarily coincide with a generated sample as well. This is because ADC just samples the incoming continuous waveform without any information about the symbol boundaries. This is a symbol timing synchronization problem which we will learn later.

[Equalization] The above methodology works only in an AWGN channel. Multipath reflections from a wireless channel introduce ISI and distortion in the signal that need to be recovered through an equalizer. This is what we study in another article.

Finally, if you are further interested in learning about frequency modulation techniques instead of amplitude, you can read the articles on analog FM and Frequency Shift Keying (FSK). 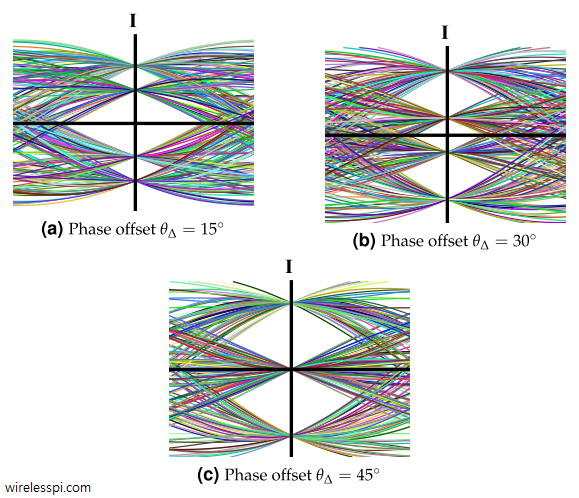 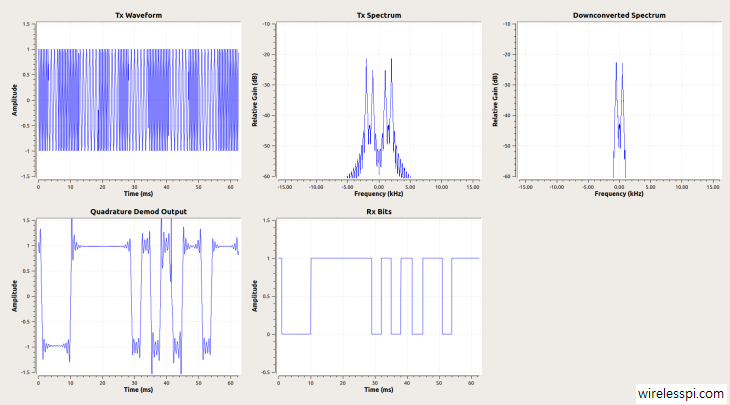